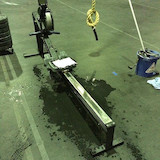 Flexible, multi-discipline software engineer and team leader with a strong work ethic. Automation advocate. Happy working solo or in a team as a member or leader. Enjoys learning, being challenged and getting things done.